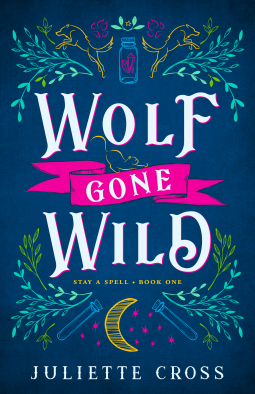 What’s the worst thing that can happen to a werewolf? Unable to shift for three months, Mateo Cruz knows all too well. His wolf has taken up residence in his head, taunting him night and day with vividly violent and carnal thoughts. Convinced he’s cursed, he needs the help of a powerful witch before he literally goes insane. ​

Evie Savoie has always obeyed the house rules of her coven–no werewolves. They’re known for being moody and volatile. So, when a distempered, dangerous werewolf strolls into the bar and almost strangles one of her late-night customers, she’s ready to bounce him through the door. But the desperation in his eyes when he begs her to help him softens her heart and convinces her to bend the rules. ​

What Evie doesn’t know is that Mateo’s wolf has a mind of his own. And now that she’s in his sights, he wants only one thing. Her.

I think Juliette Cross will be my next favorite author! She can write about Angels and Demons, Vampires and Fairytales and now about Werewolfs and Witches. And the stories are all awesome! Mateo Cruz is a werewolf with a problem: he hasn’t been able to shift for 3 months now and his Alpha is ready to break out of control. The conversations going on in his head with his Alpha are hilarious! But Mateo knows that if he doesn’t get some help, his violent Alpha will take over and start killing people.
So he turns to the powerful Savoie sisters. They are the most powerful witches in the neighborhood. But the witches normally don’t do business with werewolves. Evie doesn’t know why her eldest sister Jules doesn’t want them to be involved with werewolves. However, when she looks into Mateo’s haunted eyes, she knows she has to help him break his hex.
So, together they try to find out who has bind Mateo’s wolf. And while doing so, the Alpha puts in his two cents every other sentence. And usually with some dirty comment (LOL). Evie’s sisters: Clara, Violet and Jules are also trying to help. And while searching for the answer, we also get glimpses into the lives of the sisters. So, why is Violet acting all weird when Mateo’s cousin Nico comes to help out Mateo? And what is this weird tension between Jules and Ruben the mighty vampire who helps them find the book of hexes. Find out for yourself if they are able to release Alpha. Fun, witty and loveable! Five out of five stars from me and a special thank you to Netgalley for providing the arc. I’m keeping my fingers crossed that the next story will be about Violet or Jules, because I really want to know what is happening there…